Health and education officials from across the state are looking to give Nebraska’s effort to vaccinate children a shot in the arm amid vaccine hesitancy and misinformation with a new campaign unveiled Tuesday.

The Max the Vax campaign developed by Children’s Hospital and Medical Center in Omaha and the Nebraska Department of Education will provide families with online vaccination resources and info straight from doctors. 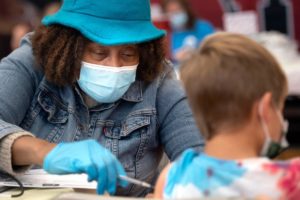 Parents can find vaccine locations and information about the vaccine in multiple languages at maxthevaxne.org. The campaign is being funded through a $500,000 grant from the Nebraska Department of Education.

According to the Centers for Disease Control and Prevention, nearly 120,000 children under age 18 have received at least one dose of vaccine against COVID-19, which officials say is a good start. But the work is far from over, they say, especially amid growing concerns about the omicron variant.

“It remains an urgent to-do for those who are eligible for the vaccine,” Chacón said.

Vaccination rates are especially lagging in Nebraska’s rural and underserved urban communities, officials said. While that’s a national trend, Nebraska remains behind other states in getting shots into arms.

“We’re not at the head of the pack,” said Sharon Stoolman, pediatrician at Children’s Hospital. “We have a lot of room for growth, and so this is an important collaboration because we have some misinformation hurdles to get over to make sure that people feel safe and comfortable giving their children the vaccine.”

There’s simply not enough information yet to determine how the emergence of omicron will affect children, health officials said, but delta showed that children are not immune from COVID’s impact.

“We’re caring for children in the hospital every day, from birth until teenagers. And some of them spend an incredible amount of time and are incredibly sick,” Stoolman said.

“And so many people would say, ‘Is the vaccine necessary for children?’ And the answer is, from my heart as a mom and my brain as a scientist and a pediatrician, the answer is ‘yes.'”

Over half of Nebraska students age 12-17 have received at least one shot.

State education Commissioner Matthew Blomstedt said recent state test scores and research have demonstrated that kids who miss school — even for as little as four days — are affected academically.

“Keeping our students healthy and in schools is just the most important thing we can right now,” he said.

Asked whether mandating the vaccine for students is on the table, Blomstedt said that’s ultimately up to state Department of Health and Human Services to decide.

There is precedent for requiring students to get vaccines for diseases like measles and rubella, which is a “really important part of the function of schools,” he said.

“Our real push right now is to make sure that folks understand the value of the vaccine,” Blomstedt said. “And whether or not there’s a mandate that comes later, I think that will be kind of done in the right process to make sure that would be appropriate.”